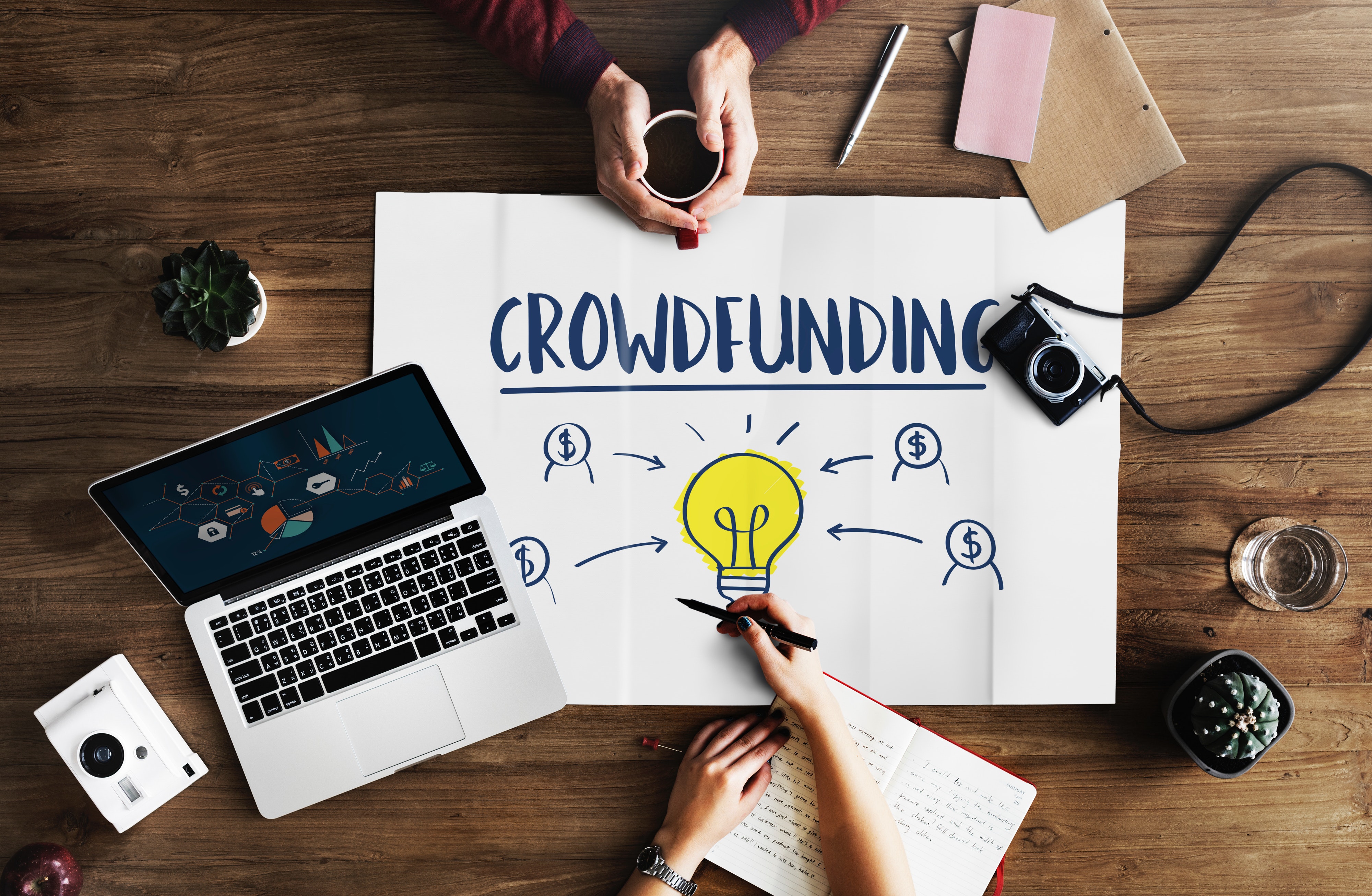 28 Aug Crowdfunding – what needs to be considered

Posted at 10:58h in Blog, ECommerce by admin
Share

The business plan is ready, the company name is found and the perfect logo designed – but one thing is still missing: seed capital. The question about the finance of a new company is very significant. From your own savings to bank loans and equity financing there are a multitude of options to choose from. Finding a source of finance may quickly prove difficult, especially for young, high-risk companies.

An unconventional alternative running the gauntlet through financial institutions promises a relatively new financing concept: crowdfunding. This phenomenon is widespread especially in the dynamic start-up scene and is also becoming increasingly popular in Germany. While in 2015 only 7.3% of Germans had supported a crowdfunding campaign, in 2018 it was already 17.7%.[1]

How exactly crowdfunding works, for whom it’s worth it and how your crowdfunding project will be a success, we present in today’s blog post.

Crowdfunding is an alternative way of financing start-ups with seed capital. The aim of a crowdfunding campaign is to reach out to as many people as possible and reach the financing target through small but numerous investments. Crowdfunding is a young and digital concept and is organized almost exclusively through dedicated online platforms. The basic principle is usually the same: A campaign is created, a target amount is determined and then you have to look for donations for your own project.

If the financial goal is achieved (and only if) the amount will be paid out. Otherwise the money has to be paid back to the donors. In addition to this framework, depending on what the donors can expect in return for their support, 4 sub-forms can be distinguished:

In „classical“ crowdfunding the initiator offers non-financial rewards, in crowddonating there is donated money without any consideration, in crowdlending investors are getting high interest and the crowd investing leads to a financial participation in the company’s success.

For whom is crowdfunding a profitable business?

The good thing about crowdfunding is that it is accessible to everyone. Whether a young start-up, a volunteer project or a crazy product idea – anyone can start a campaign quickly and easily on the multitude of platforms. After all, most crowdfunding platforms are having the idea of ​​giving projects a chance which doesn’t have access to traditional financing instruments.

While at the beginning crowdfunding focused on cultural and humanitarian projects in particular, crowdfunding is becoming increasingly interesting for business start-ups, as shown by the development of crowd lending and investing. Funding through crowdfunding offers business projects several advantages: The „crowd“ is mostly a group of investors and later buyers at the same time. Anyone who invests through crowdfunding in a company usually does it because of a personal interest in the service offer. Thus, the success of the campaign is at the same time characteristic for actual consumer interest. This contact with the target group can be further leveraged through feedback and suggestions for improvement. At the same time crowdfunding campaigns have an automatic PR and marketing function due to their visibility.

Ultimately, crowdfunding is therefore worthwhile for any company with an idea that has the potential to inspire the „crowd“. In order to succeed we have compiled a few tips for a successful crowdfunding project.

Find the right platform for your project

The first important decision in crowdfunding is choosing the right model and platform. The different models have already been explained, but at the same time the various providers also differ in their content orientation. Some platforms specialize in specific sectors of the economy, focusing only on selected project types or limited to one region. Therefore enough time should be devoted to choosing the right crowdfunding platform. A good overview for the comparison of the different platforms can be found here.

As the name implies: Crowdfunding is about the „crowd“ – and its getting convinced in a different way than the financial advice in a major bank. Crowdfunders are mostly microinvestors and buyers at the same time. Attracting enthusiasm and genuine interest is the most important thing to convince people to invest in their project. Therefore show confidently on your project profile why your product or service makes the life of potential supporters better, easier or more beautiful. Make it clear which values ​​your business idea stands for. The big incentive with crowdfunding is the feeling of being part of something bigger. Clearly communicate your mission and make your potential supporters a part of it. Last but not least the golden rule of the internet also applies to crowdfunding: rely on visual content! Prototypes, photos and videos illustrate your vision and help you to imagine the project goal.

Those who donate to crowdfunding are usually convinced not only by the project but also by the people behind it. So give your campaign a face and show who’s behind the project. By sharing the story of your project you make your campaign personal. This creates proximity, identification points for potential supporters and makes a donation more likely. Typical questions include: What is the inspiration for your project? How did you find your idea? What inspires and motivates you? And why are you and your team the right person to make the project a success?

A thorough budget plan is essential

Crowdfunding is about projects and people who inspire. But that does not mean that the „naked numbers“ should be pushed completely into the background. Your supporters want to know what exactly they are donating their money for. Therefore, show in a rough financial plan what the investments should be used for. Especially important: calculate your target amount carefully. Only if the amount is reached, it comes to the disbursement – setting a too generous target amount could endangers the success of the campaign. At the same time, an investment that is too tightly calculated can lead you to be unable to keep promises, such as certain rewards, or even the entire project can’t be realized. The calculation should therefore be as realistic as possible.

The rewards are a crucial incentive to gain supporters. In crowdfunding and crowdlending the consideration for the supporters is already roughly predetermined. It’s different with classic crowdfunding. Here are usually several levels of non-monetary rewards offered as donation motivation. In business projects the classic among rewards is the actual business performance, the product or service. Often there are offered different grating rewards analogous to the investment amount. For example in which the amount is increased or additional items, such as merchandise, are added. Another strategy is to offer priced reduced rewards with a time limit to create momentum in the beginning of the campaign. In addition with unconventional rewards, such as a special event, additional attention can be generated for all supporters in addition to incentive effects. Basically the more attractive, unique or exclusive the rewards, the better.

Crowdfunding is not a matter of course

A compelling campaign profile on the right platform is just the beginning of successful crowdfunding. Because with the increasing popularity of crowdfunding the number of projects is constantly increasing. In order to survive in the jungle of crowdfunding projects the campaign must be continuously promoted and the right target group addressed. Hand in hand crowdfunding is an internet phenomenon with a good social media strategy. Activate your network in advance and teaser the launch of your campaign in the social media. If the funding is running you should keep your supporters up to date with project updates, milestones and interim goals. As a consequence the chance of your action being shared is higher. Ultimately advertising is worthwhile wherever your potential target group is. It is important to have human resources available for questions and comments from the supporters. Crowdfunding is a valuable direct link to the target group – it should be encouraged and nurtured.

Although unconventional, crowdfunding can be a promising financing funds for young, innovative companies. With a successful campaign the required capital can be gained and the target group can be approached before the launch and tied to the company. Decisive for the success is the realization that crowdfunding is more than the creation of a campaign. Crowdfunding means continuous use for the distribution, application and communication with the crowd.

We hope that we could give a few helpful tips to all those who are considering crowdfunding and wish them all the best with their campaign and the start of their self-employment!