Create stories and posts on Instagram and share them on the Facebook page with just a few clicks. This time-saving feature has been available since 2017 and can be used by both individuals and businesses. In March of this year, Facebook announced to TechCrunch that it would also test this function in the other direction. Content will also be shareable on Instagram from Facebook in the future. How this works and to what extent this function is advantageous is the topic of this week’s article.

In March 2020, it was also announced that the cross-posting-function would now also be tested and introduced in the other direction. Content is therefore now also to be shared from Facebook directly on Instagram.

How does the whole thing work?

Furthermore, it should be noted that the caption of the posts on both platforms will initially be identical. The selected address should therefore be equally suitable to the different target groups. A subsequent adjustment of the caption on Instagram as well as the addition is possible.

The function, if available, is displayed when creating a post. To do this, a new post must be created via the post options, for which the checkmark for publishing on Instagram must then be set. What this looks like is shown in the screenshots below: 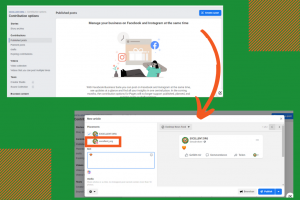 Another possibility to use the cross-posting function is offered by Facebook’s Creator Studio. Here, posts that have already been published can also be posted later on Instagram (shown in the screenshots below). To do this, simply select the „Posts“ tab and click on the three dots next to the corresponding post. At the bottom, the option „Post on Instagram as well“ is available. If you select this option, you can even adjust the caption in the next step. And with just a few clicks, posts can also be published on Instagram. 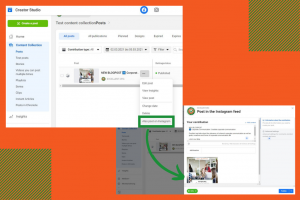 Is it a useful function?

Such a function brings with it a number of advantages. For example, companies can save an enormous amount of time, as they do not have to create and upload differentiated content for various platforms. In addition, the target or follower groups of Facebook and Instagram are connected and the reach is increased. However, whether it is actually a useful feature remains to be doubted.

Follower groups on Facebook and Instagram can have very different needs and desires. What’s more, the goals pursued on the respective platforms can differ greatly. For this reason, it may make more sense to choose a differentiated approach and even different content for the two networks.

Furthermore, it should be noted that posts or content on Facebook and Instagram do not work exactly the same. Instagram is a purely visual platform. The images and videos that appear in the feed above the corresponding caption should function as far as possible without text. The caption thus serves to support the visual content and to introduce some hashtags. Although Facebook is also moving more and more towards visual content, photos and videos often still serve more to support the message of the text. Written content continues to appear above visual content in the Facebook feed, further reinforcing this impression.

Furthermore, there has been no synchronization of user activities so far. If a user has already seen a story on Instagram, it is still marked as new on Facebook (and vice versa). If this synchronization continues to fail, this could lead to additional frustration on the part of consumers. Viewing numerous pieces of content twice leads to annoyed users and can thus also encourage them to unsubscribe.

Time and again, Facebook and Instagram come around the corner with new features and new connections between the two platforms. While these offer considerable potential for both private users and companies, they can also cause frustration. To what extent such updates make sense and are beneficial can only be seen. In any case, companies should always make sure that they address all target groups adequately in order to ensure customer satisfaction and, accordingly, the success of the company.